Pelvic floor imaging part 2: what is a proctogram?

The xray test is called a defaecating proctogram (defecating for North American readers), sometimes known as a voiding or evacuating proctogram. It is a dynamic test, meaning that an xray movie is created during the act of straining and opening the bowels. Using some sort of scan is the only way of knowing from the outside what is actually happening to the back passage during the act of opening one's bowels.

To start with, in my practice all female patients take a small volume of barium to drink before the test to show up the small bowel. The small bowel lies in the centre of the abdomen but sometimes can drop down into the pelvis and press on the back passage. This is less the case in men so they don't drink any barium. Just before the test, barium paste is put into the back passage and this is what is expelled.  The barium paste is also what gives patients the urge to open their bowels for the test. The patient sits on a commode next to the xray machine, and the radiologist (me!) and the radiographer are behind a screen. Xrays are then taken at rest, and then during straining and opening of the bowels.

This is what the first image usually looks like with barium (white) in the back passage. The white in the top left is barium in the small bowel. 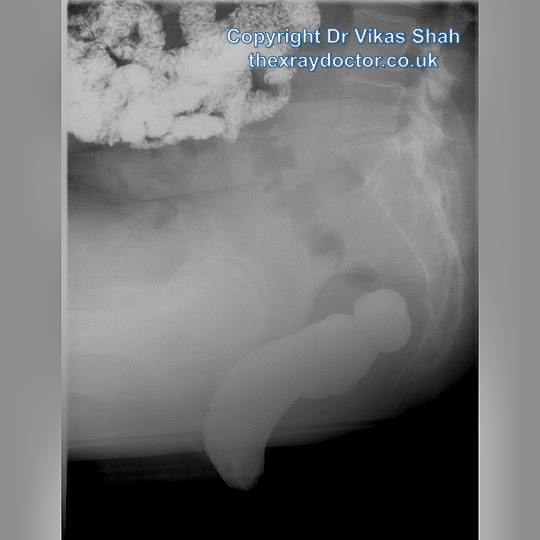 This next movie clip (from my YouTube channel) shows what happens during evacuation (i..e actually going to the toilet) in someone with a rectocoele (more on this in part 3 of this series). Note that in normal xrays like the one above, barium is white, and in the movie clips like below, barium is black.

As the patient starts straining, the barium paste comes out of the back passage but some gets trapped in a bulge at the front (to the left side of the picture).

There are lots more examples of proctograms in the Proctogram playlist on my YouTube channel.

Many patients worry that they won't be able to expel any paste. This doesn't matter for this test; as long as they try, I will get useful information from the xrays about what is happening inside the pelvis. Once the test is finished, patients go straight to the bathroom to get dressed. All of the barium is naturally expelled over the course of a few days, with no harmful effects.

Note that no xray dye or contrast is put into the bladder or vagina.

In my experience, the test fills people with anxiety until they actually have it done; the vast majority of my patients tell me that it really isn't as bad as they feared. There is no denying that it is a difficult test to go through, and trying to open one's bowels in an xray room is challenging, but even coming for the test is an important step in the journey to getting treatment and improving quality of life.

In the next post, I will show you examples of a rectocoele (rectocele for North American readers).

(If you think you need this test, it is advisable to see your doctor first and then I am happy to be involved in any consultations. Please see the Contact Me page for more details).

Posted by Unknown at 1/18/2014 10:09:00 pm Labels: pelvic floor
Email ThisBlogThis!Share to TwitterShare to FacebookShare to Pinterest