This week's #xrayoftheweek is another one exploring the use of diffusion weighted imaging in abdominopelvic radiology. The panel of images shown below is from a small bowel MRI: 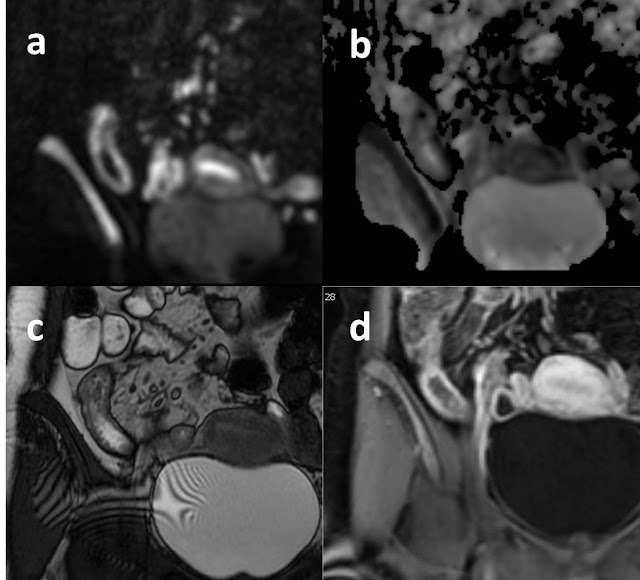 In (c) and (d) you can see that there is mural thickening and hyperenhancement of the small bowel in the right iliac fossa - indicating active inflammation. This area is shown as having restricted diffusion on (a) and (b) - high signal on the high b value DW image and low signal on the ADC map (this is a recap of the basics of diffusion weighted imaging).

This is an active area of research with multiple studies validating the use of DWI as an additional sequence in small bowel MRI, with interest in being able to replace post-contrast imaging. I have been using it routinely in all my small bowel MRI cases for almost a year, and have found it increases my confidence in identifying active inflammation, particularly when contrast has not been used. By adding this, and the peristalsis sequence I described in xrayoftheweek 17, I have moved away from an analysis based solely on static findings, and am using more dynamic and functional data in my reporting.

If you want to read more about this topic, these two articles by Hordonneau and Sinha are a good starting point.